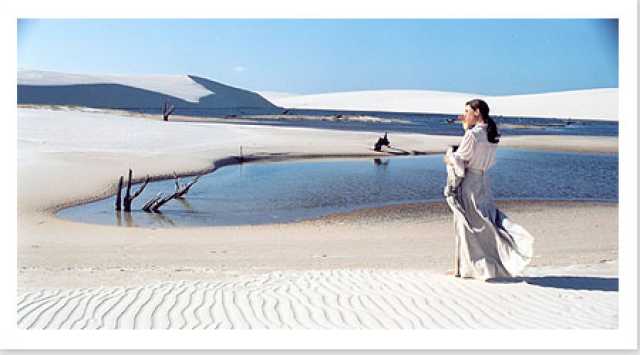 Technical specifications
Technical Details: Format: 35 mm - Color,Length: 115 minutes
Sound System: not indicated
Remarks and general Information in German: Andrucha Waddington has assembled some of the greatest talent in Brazil to relate this 19th-century saga of frustration, perseverance and redemption. Two of the country's finest actresses, Fernanda Montenegro and her real-life daughter Fernanda Torres play a mother (Aurea) and daughter (Maria) abandoned in the wilds of northeast Brazil. Aurea's demented husband Vasco (famed director Ruy Guerra doing a turn in front of the camera) drags his family to the Maranhão region, a stunningly beautiful desert of shifting sand dunes and vast horizons, under the magnificent delusion that he can grow crops there. But Vasco dies soon after arriving. Thinking they are now free, the women attempt to return home. When an expedition of English scientists passes through and American warplanes fly overhead, they seem like strange emissaries from a distant world. Although thwarted in their original mission, the women find their lives punctuated by explosions of love, passion and fulfillment. In the end, the three generations of women - all played by Montenegro and Torres - have experienced a range of emotions as vast and beautiful as the desert itself. (Filmfest Motovun)

Casa de Areia is a motion picture produced in the year 2005 as a Brasilia production. The Film was directed by Andrucha Waddington, with , , Ruy Guerra, Seu Jorge, Stênio Garcia, in the leading parts. We have currently no synopsis of this picture on file; There are no reviews of Casa de Areia available.

The information above does not purport to be exhaustive, but give the level of information to our database at the time of last update. All figures are best knowledge and belief researched to, legal claims arising from incorrect or missing information are expressly rejected.
Due to the current law in some countries can be held responsible person who addresses refers to having a criminal content spread may or criminal content and pages further refer, unless he closes clear from such liability. Our links below are researched to the best of my knowledge and belief, but we can not accept in any way for the content of these web pages and links from us any liability. We provide this explanation by analogy from all countries and all languages of. Quotations, if not otherwise marked, in the usual right to quote with identification of the sources added.
The copyright lies with the authors of these quotes - Casa de Areia (2005) - KinoTV Movie Database (M)